To most of us, when we think of survival arms, spartan, utilitarian guns such as the ArmaLite AR–7 .22 semi­automatic or the M6 folding rifle/shotgun come to mind. Both guns are rugged, reliable, foolproof and no–nonsense. Perhaps they are not all that elegant, but they can do the job.

It might come as a surprise then that, for a short time in the 1930s and ’40s, there was a survival combination gun manufactured to the highest standards by one of the finest arms makers in the world, a firearm that could hold its own with some of the best–grade sporting arms of the time: the Sauer M30 drilling. When one learns how it came about and who championed it, it becomes clearer how such a piece could ever been considered for use in a combat role, oblique though it might have been.

By the late 1930s, the German Air Force (Luftwaffe) had become the pride of the Nazi regime. Led by former Great War ace and ardent member of Adolph Hitler’s inner circle Reichmarschall Hermann Göring, the Luftwaffe was unquestionably the most politicized branch of the German Wehrmacht. Göring, a man never given to temperance, lived a lavish lifestyle in an elegant castle-like residence decorated with stolen artworks. Addicted to flamboyant uniforms (as well as morphine), he enjoyed fine wines, haute cuisine, and his pride and joy, the Luftwaffe.

Appearing to the outside world as an avuncular, almost comic figure, Göring was, in fact, a true believer in National Socialism and, accordingly, was a cruel, pragmatic manipulator responsible for a number of the many atrocities committed by the regime, not the least of which was his being one of the architects of the Holocaust.

As well as being Hitler’s second in command and Reichminister of Aviation, among his other duties and honorariums, Göring, an avid hunter, was also Reichminister of Forestry who was familiar with all types of fine sporting arms. When it came to choosing a survival arm for his pilots, who better to turn to than the respected high–end Suhl gunmaker J.P. Sauer & Sohn.

Sauer offered a copious variety of superb sporting rifles and shotguns, including a line of triple–barreled drillings (the name derived from Drei, German for “three”). Models were offered in a range of styles and grades with barrels in various shotgun–gauge and rifle–caliber combinations.

After discussions within the Luftwaffe hierarchy and conferring with J.P. Sauer & Sohn, it was decided in mid–1941 to adopt one of the firm’s drillings as a survival arm which, according to top World War II German ace and final commander of the Jagdflieger (i.e., “Fighter Force”) Generalleutnant Adolph Galland, “In 1942 and 1943 …. was standard equipment for our fighter Bf 109 and Stuka bombers to operate in the desert. The purpose was to shoot animals for survival.” 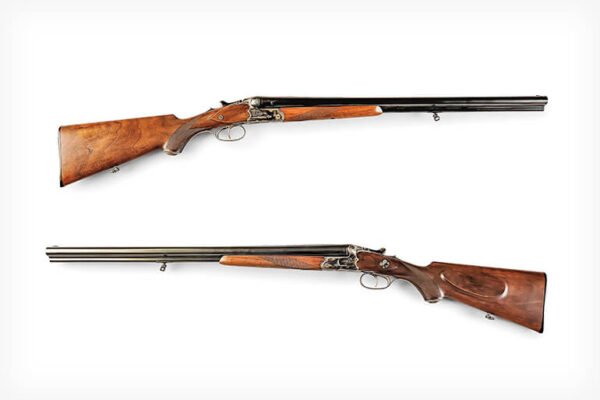 The “M30,” as it would be called, was arranged with two upper 12–gauge shotgun barrels, the left set up to handle Brenneke slugs and the right, normal shotshells. The lower rifle barrel was chambered in 9.3x74R, a popular magnum–range sporting round introduced around 1900, and roughly equivalent to the British .400/360 Nitro Express. With a 286–grain bullet, muzzle velocity normally ran some 2,360 feet per second (fps) and muzzle energy was at 3,530 foot-pounds (ft.-lbs.).

This arrangement gave the pilot good options for self–defense and game–getting should he be downed in any number of different locales and climes. The M30 came packed, broken–down, in a green–painted transit case also containing ammunition (20 rounds of Brenneke shells, 25 rounds of shotshells with 31/2mm shot, and 10 rounds of 9.3x74R), a commercial cleaning kit in a cardboard box, manual and sling. The chest, which was small enough to put beneath an aircraft seat, was stenciled on the lid with the arm’s designation and accessories and Sauer’s “CE” wartime maker’s code. Inside the top cover was a detailed list of contents. 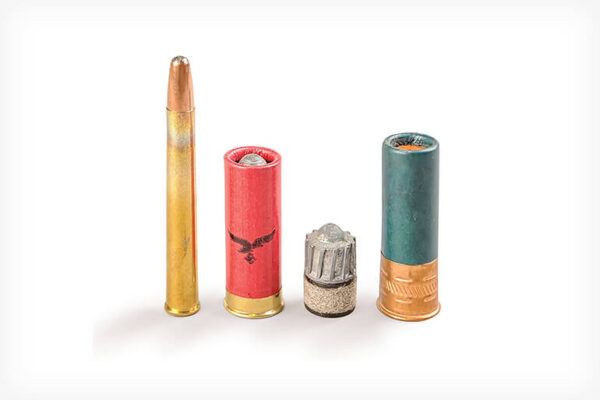 Being ostensibly a military arm, embellishments on the M30 were kept to a minimum, but there was still enough engraving on the drilling’s case–hardened frame and blued Krupp-Laufstahl barrels, along with a beautifully–finished and checkered walnut stock, to be able to discern its elite, civilian origin. Really, the only things indicating any martial intent were a brace of Luftwaffe eagles, one on the stock and one on the barrel, as well as an “Eagle 2” Luftwaffe ordnance stamp on the forward locking lug. Measuring 42 inches and weighing a lithe 7½ pounds, it was unquestionably the most elegant issue firearm in World War II, and just the ticket to appeal to Göring’s love of fine things.

The M30 was based on a hammerless Blitz action whereby the majority of the mechanism is mounted on the trigger plate, a simple arrangement that can be efficiently employed in drillings. The gun also had British Greener–style cross bolt and side clips, along with a duo of underclocking lugs and a top–a lever that allows it to be opened like a normal double shotgun. 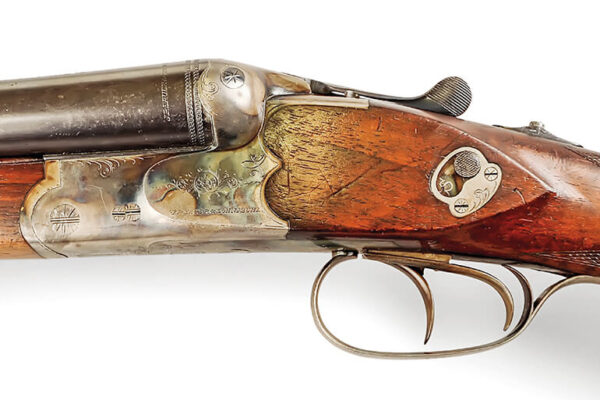 It was fitted with a pair of triggers, too. To fire the rifle barrel, one pushed forward on a selector atop the tang, which raised a V–notch, 100–meter rear sight. The forward single–set trigger fired the rifle barrel and the rear trigger the Brenneke barrel. After returning the selector to its rearward position, the front trigger was now able to discharge the shotgun barrel. The front sight was cleverly configured to serve adequately for both rifle and shotgun. Gold-plated indicators on the top of the receiver showed at a glance (or feel) which barrel(s) had been already fired. The gun’s safety switch, featuring a silver “S,” was sited on the left side of the stock where it could be easily be manipulated with the shooter’s right–hand thumb.

Production on the M30 began in earnest and between 1941 and 1942. It is estimated that somewhere around 2,500 were produced. As the war progressed, Sauer was increasingly called upon to build other, more useful arms for the Wehrmacht, so it was decided that the drilling project would be terminated. More than likely, except for the few that might have ended up in the gun rooms of high–ranking German officers, the majority of the Luftwaffe drillings issued continued to be carried aloft until the war’s end. 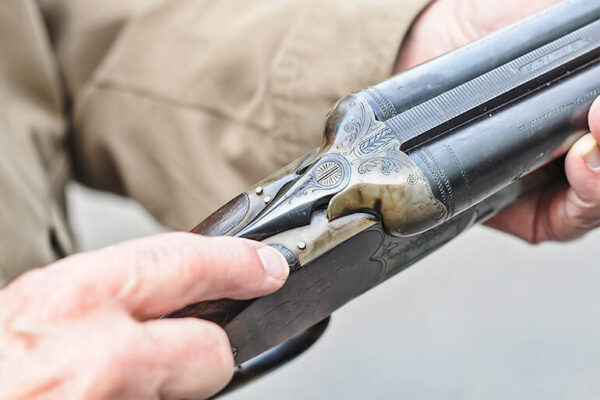 Each barrel has its own gold-plated cocking indicator. (Jill Marlow photo) 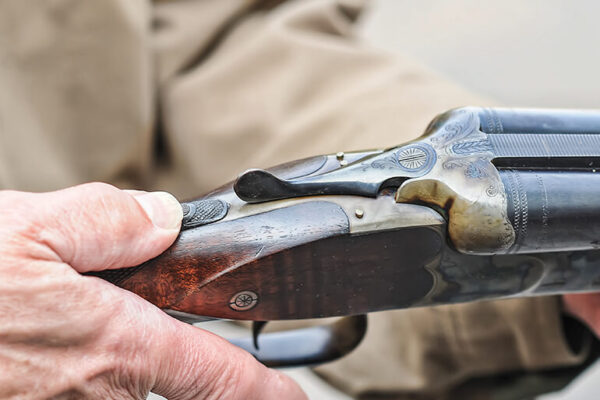 A selector on the M30’s tang allows the shooter to switch from rifle to shotgun barrel, or vice-versa. (Jill Marlow photo)

We were able to secure a very good condition M30 for this evaluation. As expected, it was a fine piece of work. Fit and finish are of the highest quality. Securing ammunition proved to be something of a mixed bag, though. Fortunately, 9.3x74R is still a relatively popular round and is currently being loaded by Hornady, Federal, Norma, Sellier & Bellot, RWS, and Prvi Partizan. Available bullet weights vary from 185 grains to 286 grains, with the latter being the most common.

The 12–gauge shells were a little more difficult, as they had an overall length of 65mm (2½ inches). Brenneke still offers rounds employing an early–style Model 1930 solid, ribbed, 490–grain slug with felt and plastic wads screwed onto the projectile’s base. Really, the only difference between the current and period slug is the former used a card-base wad and slotted screw while the new one, in keeping with the times, I suppose, sports a plastic wad and Phillips screw. This does not affect performance. The easiest way to construct the proper cartridge was to secure some modern 2¾–inch Brenneke rounds loaded with “Original–Brenneke” slugs, remove the slugs and relocate them to 2½-inch hulls. My good friend and gun writer Terry Wieland managed to supply me with some French Cheddite papers and arrange for his associate, Bob Hayley, to reload them to period specs, tasks for which I most sincerely thank them. 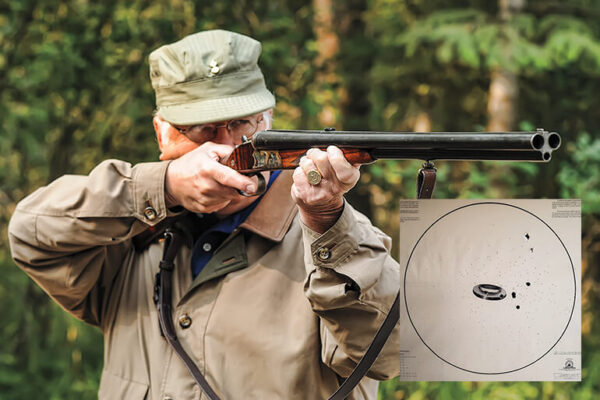 I could find no 2½–inch shells with No. 2 shot currently available. For once, my being something of a hoarder paid off. I was able to rustle up a half–dozen vintage paper shells loaded with 1 ounce of No. 2s, and these would suffice.

From what I can determine from examining several cased M30s that still retained their original ammunition, the rifle and shotshells were commercial loads, the 9.3x74R usually RWS and the 31/2mm shotshells, Rottweil “Waidmannsheil.” Brennecke’s were, unsurprisingly, by Brenneke. For the evaluation, I chose 285–grain Prvi Partisan 9.3s for the lower barrel and the shells mentioned above for the uppers.

The Sauer was simply a dream to hold and operate. It is true old-world craftsmanship. The controls were quite simple and the trigger pulls on all three barrels averaged 3½ ­pounds. The shotgun barrel was tried on a 30–inch NRA ST–2 target at 40 yards, full patterns running in the 70 percent range. Brennecke’s were fired at the target’s central image of a clay target and came in at 5 inches, slightly low and to the right. Rifle groups from a rest at 50 yards ran an average of 2¾ inches, which was very close to point of aim. The gun handled beautifully and recoil, even with the 9.3s and Brennekes, turned out to be surprisingly light. All–in–all, the M30 drilling is a class act. Certainly, it would be great for the hunting fields.

The M30 came installed in its own metal case with ammunition and accessories, as noted on the case lid in German. (Jill Marlow photo) 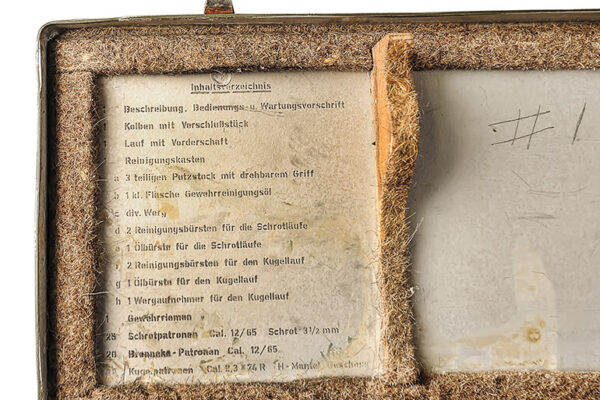 The M30 had a short production span, only being manufactured in the early part of the war when Germany’s fortunes were in the ascendance. Such an over–the–top, costly military arm could only have come into existence after being championed by such a vainglorious soul as Hermann Göring. When you think about it, just managing to wrest the drilling’s heavy, awkward case from beneath a seat in the cramped cockpit of a flaming, out–of–control Messerschmitt Bf 109 would have been an amazing feat, not to mention trying to figure how to keep hold of it while also controlling a parachute plunging earthward. I imagine what was probably in the Reichmarschall’s mind at the M30’s inception was a reverie involving one of his gentleman aviators gently dropping into a sylvan glade, whereupon he takes a bracing draft of Jägermeister and then unpacks and assembles the arm. Immediately spotting a red deer as it daintily drinks from a limpid tarn, he loads and begins the stalk. It’s a scene accompanied by strains of “Prelude and Liebestod from Tristan and Isolde” by Richard Wagner. Unquestionably, it is an evocative vision, but hardly the reality of war.